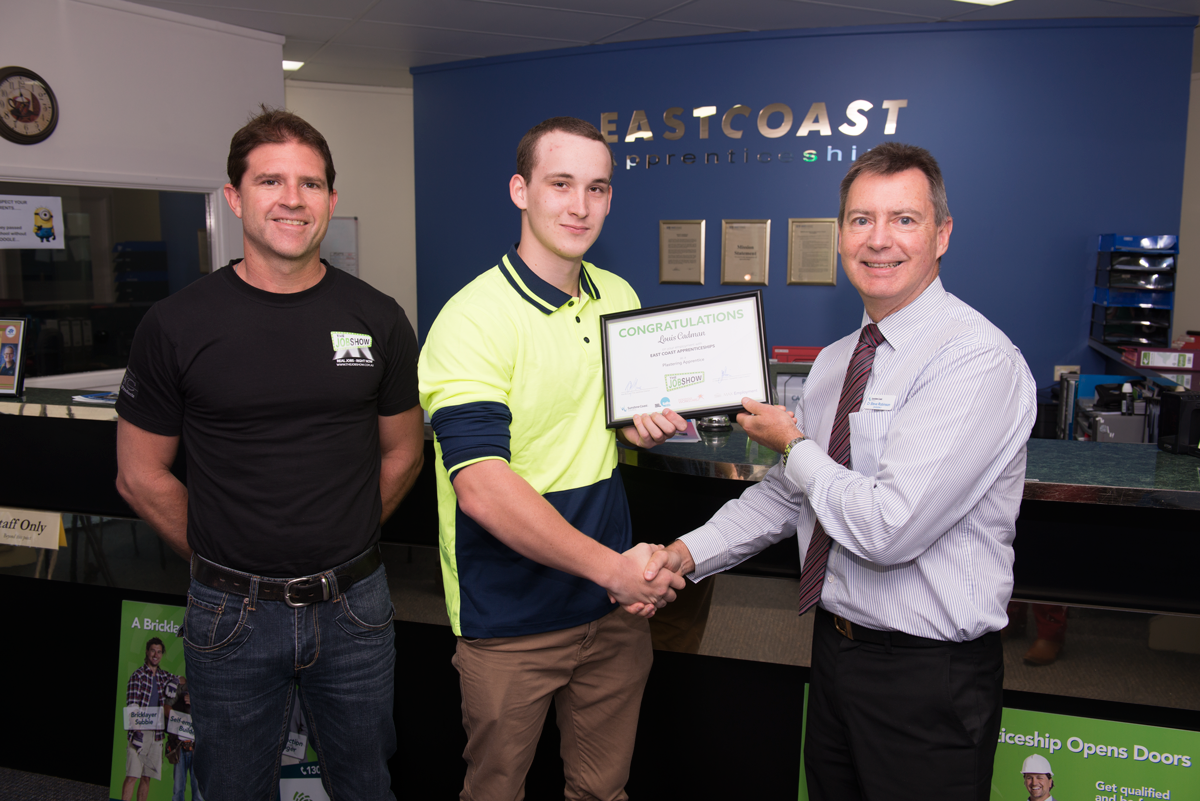 Written by Ben Allan on September 25, 2015. Posted in In the media, Success Stories.

“I’d been through a few jobs while I was at school at a pizza store, a shoe store, Bunnings and Kmart but that was all casual work and I needed something a bit more permanent because I’m getting older and I wanted to put my head down and do something with my life,” Louis said.

“I went to the Job Show with it in the back of my head that I could get a job out of this.

“I definitely thought an apprenticeship was going to be ‘me’ and I had some knowledge about plastering so I decided to go for it and I’m so glad I did.”

Mikhaela, 21, this week started her new full-time career with Comlink, a not-for-profit registered charity that delivers transport and social support to frail aged people and people with disabilities.

“I’m four years out of school and have a Bachelor of Science degree, but job satisfaction and the feeling of making a positive difference to other people’s lives was something I really needed,” she said.

“I had researched what Comlink were all about and I thought that’s pretty great so when I heard they were exhibiting at the Job Show I couldn’t wait to get there.

“The chance to connect face to face on the day with Comlink was terrific and I’m so excited to embark on this new opportunity in the health sector.”

Louis and Mikhaela were among 65 locals who’ve already scored jobs through the August 20 Job Show. More than 250 other participants secured job interviews and around 900 resumes were handed out to local employers on the day.

“The Job Show had a real point of difference from your typical careers expo,” she said.

“It enabled job seekers like Louis to approach us and fellow exhibitors and achieve real employment outcomes on the day.
“To see more than 2000 people participate on the day, and the number of people who’ve already earned jobs or job interviews as a result, clearly indicates the need for this event to continue into the future.”

Comlink Human Resource Manager Tammie Guy said the August 20 event had provided an ideal setting to find suitable employees.
“Mikhaela came over to where we were exhibiting and showed a genuine interest that I picked up on straight away by being able to meet with her face to face,” she said.

“Comlink also signed up around 60 volunteers from the Job Show and we were also able to discuss possible upcoming traineeship opportunities with interested people on the day.”

Economic Development Portfolio Councillor Stephen Robinson said the success of the Job Show highlighted the confidence that exists in the local economy.

“More than 500 jobs were advertised at the Job Show and council believes this demonstrates that we’re getting the economic setting right because those jobs wouldn’t be offered unless employers have confidence that the region is moving forward at pace,” he said.

“The Job Show supported the Sunshine Coast Regional Economic Development Strategy (REDS) that aims to triple the size of our economy to $33 billion over the next 20 years and increase the number of jobs in our seven High Value industries from 59,000 to 100,000.

“The important thing for council is to make sure people have confidence in the economy and that our small businesses are encouraged to expand because when they do that, job opportunities arise. We’re very confident that over the next few years as the local economy continues to grow  there’s going to be lots more employment opportunities.”