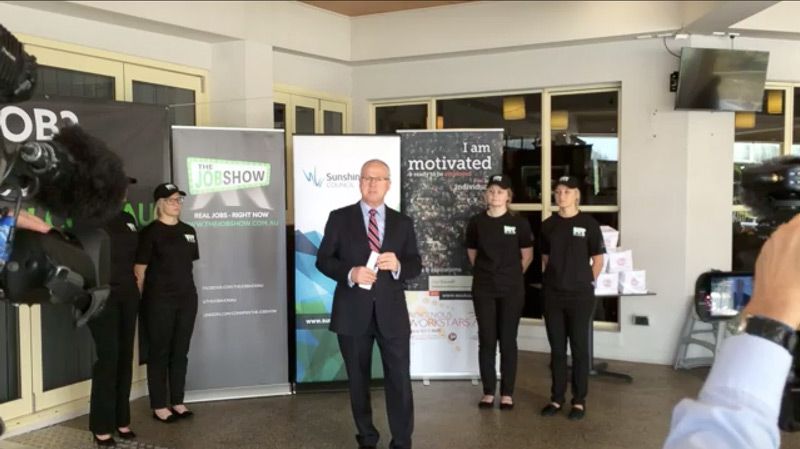 From the Sunshine Coast Daily:

SUNSHINE Coast jobseekers should circle August 20 on their calendars.

More than 300 jobseekers and 37 private and public sector employers have already registered for the event being held at the TAFE Queensland Eastcoast Mooloolaba campus, with more registrations tipped to flow.

Along with exposing jobseekers to some of the region’s most prominent employers, the event will also deliver interview workshops, as well as providing access to specialist advice for Indigenous jobseekers, plus a $6000 scholarship up for grabs for one lucky Job Show attendee.

Launching the event at the Waterfront Hotel yesterday, Mayor Mark Jamieson encouraged local employers to register their jobs and take advantage of the opportunity to get some face time with the future Coast workforce, hoping for up to 500 jobs to be showcased on August 20.

“Over the last couple of years the Sunshine Coast has been leading Queensland in terms of job creation but there’s still a long way to go,” he said.

“There are lots of job opportunities out there that are quite often not made aware to jobseekers… it’s all about the local jobs that are available now on the Sunshine Coast.”

Cr Jamieson said he understood Ken Mills Toyota would be looking to employ a Job Show attendee, and encouraged locals looking for work to continue to further their skills base as they hunted an opportunity.

“I learn new things every day myself… you’re never too old to learn and the world’s a rapidly changing place so to think you can survive in the future on the skills of today I think is a fallacy,” he said.

Gourmet Garden human resources manager Rebecca Tindall said she was excited to get a chance to chat in an informal setting with jobseekers, and said cultural fit and attitude were the keys for future employees.

“We’re looking for people with a great attitude, a great work ethic and can have fun,” she said.

To register for the event visit thejobshow.com.au.