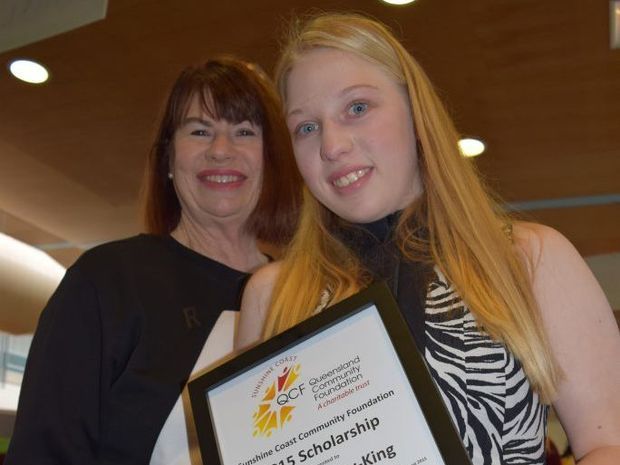 Written by Ben Allan on August 26, 2015. Posted in In the media, Success Stories.

From the Coolum News:

THE way forward after school was unclear for Jessica Rigby King, 18, from Peregian until she stepped into the Sunshine Coast job show.

Jessica is in Year 12 at St Andrew’s Anglican College and attended the show with her grandmother Jacqui Rigby King who plays the “mum” role in Jessica’s life.

Jacqui said she had been supporting Jessica in her quest to study beyond high school and had been looking for a scholarship.

“Sadly it was really at the point where if she didn’t get a scholarship then there was just no way that we could afford it,” she said.

“I saw an advertisement for the job show and I said ‘Jess, let’s go there’.

“We received information about the Sunshine Coast Community Foundation Scholarship  because we were on the job show mailing list and so I encouraged her to apply.”

To Jessica’s and Jacqui’s surprise and delight it was announced at the show that Jessica was the recipient of the scholarship.

Jessica will finish high school with an impressive array of certification.

“I’m feeling overwhelmed and grateful for this scholarship… my life has just changed,” she said.

“I was originally thinking that I was coming to the job show to find a job but now I can be a full-time student it’s awesome.

“I’m going to study a diploma in travel and tourism here at TAFE. I think I’d like to be a travel agent but I’m not sure what else there is to do in the industry.

“It’s hard to know what jobs are out there because I’ve been at school and not in the working world so TAFE will be an exciting place.”

The scholarship is funded by the Queensland Community Foundation (QCF) for TAFE Queensland East Coast study.

The name of the scholarship is the Sunshine Coast Community Foundation Scholarship.